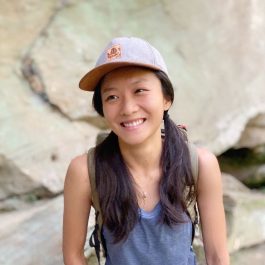 Chenchen hails from the Fuling district in Chongqing, China, but now resides in Vermont. She is a writer and regular contributor to China’s largest outdoor recreation magazine; she’s also written for several rock climbing websites. Chenchen is a climbing instructor and spent her younger years as a competitive climber. She’s fluent in both Chinese and English, and she is joining Adventure Treks for her second season as an instructor.