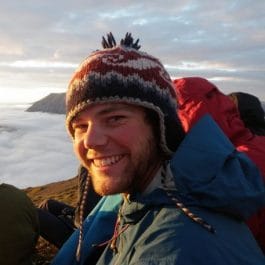 Ian returns to Adventure Treks for his sixth season as an instructor. During his time at Lewis & Clark College, Ian led backcountry trips for the school’s outdoor program. He spent three summers as a research lab assistant, organizing and leading field expeditions, including collecting spiders and other arachnids across the Caribbean. He’s also worked as a ski instructor at Beaver Creek Resort in Colorado. Ian also has a master’s degree in ecology and evolution at the University of Oregon. Fun fact: This Eugene, OR, resident owns a map-making company called Map Your Adventure!