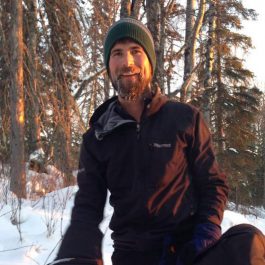 Pete will be returning to Adventure Treks for his fourth season as an instructor. Originally from Anchorage, AK, Pete currently resides in Moab, UT, where he is a fourth grade teacher. In addition, Pete is a coach and the program director for the non-profit organization Moab Youth Cycling. He’s also worked as a mountain bike guide for Alaska Mighty Bikes, Bend Endurance Academy, and Durango Devo, and coached cross-country skiing. He has mountain biked and ski-raced all over the United States, including biking the full 2,600 miles of the Great Divide Mountain Bike Route and across Alaska on the Iditarod Trail.