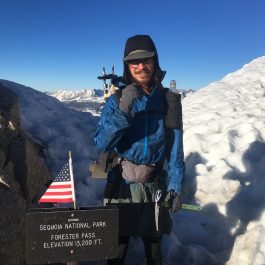 A Milwaukee, WI, native, Ryan’s love for outdoor education began when he was a counselor for a YMCA camp in his home state. He later became the outdoor explorer director, leading campers on multi-day canoeing and backpacking trips in northern Wisconsin. He was also an environmental education instructor, leading team-building, canoeing, kayaking, and fishing activities for kids and teenagers. He also worked at Camp Kindred, a intentional community that brings together children of different race, ethnicity, and economic advantage. Before coming to Adventure Treks, Ryan was a graphic designer for an advertising agency. He joins Adventure Treks for his second season as an instructor.