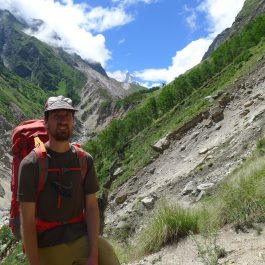 Originally from the Northeast, Zach has spent the better part of a decade working as a math and physics teacher in China (two years) and India (seven years). In Mussoorie, India, he was interim head of the math department and taught precalculus and Advanced Placement calculus to high schoolers. Before traveling east, he was a math and science teacher in New York for high school juniors and seniors. He’s also led backcountry expeditions in the Indian Himalayas, is a graduate of both the National Outdoor Leadership School (NOLS) and the Nehru Institute of Mountaineering in Uttarkashi, India, and can speak Chinese and Hindi. Zach returns to Adventure Treks for his third season as an instructor.