We are so excited to be heading back to Yellowstone and Grand Teton national parks this year! As we gear up for this adventure, we thought we’d share a few interesting facts we’ve learned about the area.

1. Yellowstone National Park, in Wyoming, Montana, and Idaho, was the world’s first national park, established in 1872. This was 20 years before those three states were granted statehood in our country, and more than four decades before the National Park Service was created, in 1916. Yellowstone began to change the landscape of how Americans viewed nature and the outdoors, and it has spurred the creation and designations of thousands of national parks around the world.

2. With more than 3,472 square miles, Yellowstone National Park is larger than Rhode Island and Delaware combined.

3. Though not as large or imposing as the Redwoods in California and the Pacific Northwest, the lodgepole pine trees are just as impressive: Some of them have been around as long as 400 years! About 80 percent of the park’s trees are lodgepole, so it’s extremely likely you’ll be walking past trees that date back to the 1600s. 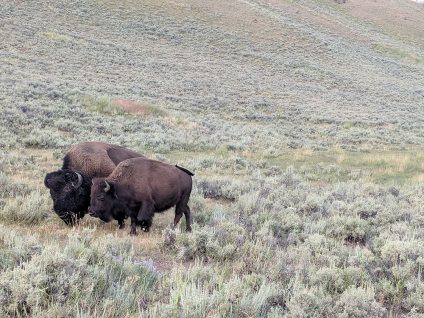 4. You will likely see some wildlife! Yellowstone boasts the largest free-roaming herd of bison in the world. In addition, the park is full of elk, moose, bears, and wolves (though the latter tend to keep to themselves). It’s ecosystem is impressive, with more than 65 species of mammals, 285 species of birds, and even two threatened species, the Canada lynx and grizzly bear, and one endangered species, the gray wolf.

5. Beneath Yellowstone Lake is the one of the world’s largest supervolcano calderas, measuring 30 x 45 miles. It’s erupted just three times in the last three million years, but don’t worry: Scientists think we’re safe from another eruption for at least another 10,000 years!

6. There are more than 300 active geysers and 10,000 thermal features in Yellowstone, including two of its most famous celebrities, Old Faithful and Grand Prismatic Spring. Old Faithful, as its name suggests, erupts every 90 minutes. The incredibly vivid colors of Grand Prismatic Spring, the world’s third largest hot spring, are due to microbial mats and change with the seasons. Another thermal feature, the Grand Geyser, spews water up to 200 feet in the air.

7. When explorer David E. Folsom first took in the beauty of Yellowstone Lake, he and his comrades wrote an account of their discovery, but magazine editors wouldn’t buy it because it sounded too good and too beautiful to be true.

9. You may hike past some of the park’s 290 waterfalls—the tallest of which soars to 308 feet.