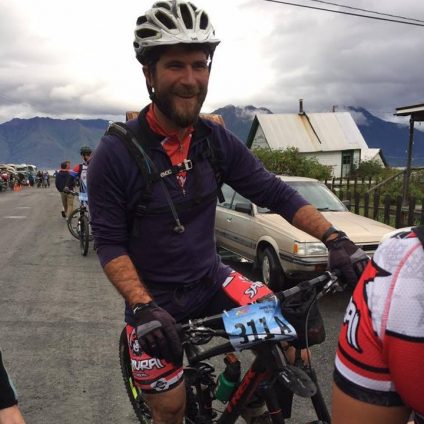 Leaving at sunrise on the morning of December 24, three-year Adventure Treks instructor Pete Basinger began his journey on the Baja Divide, an approximately 1,570-mile bikepacking route down the length of the Baja Peninsula in Mexico. Pete, currently a resident of Durango, CO, is a fifth-grade teacher who lives for multi-day adventures on his mountain bike. He is well known in the ultra-cycling community (i.e., any people who enjoy 100-plus-mile, multi-day mountain bike rides). Pete has become well known for rides on the Iditarod Trail in Alaska, the Great Divide trail in Colorado, and on the Kenai Peninsula in Alaska.

Pete is one of our most trusted and competent instructors; he’s an incredible outdoorsman, and our students love him. He connects with teenagers by helping them build their confidence and skills in nature, and his sense of humor and goofiness lends a lighthearted touch to our inclusive communities.

Pete is also a longtime friend, so the evening before he departed for his journey, we caught up over text. I am not exaggerating when I say that Pete is the most humble person I know. Keeping that in mind, I knew to dig a little deeper to find out exactly what Pete intended to do on his trip down the Baja Divide. The first thing he told me was that he needed to decide whether or not he was “going to ride this thing fast.” I thought to myself: “Fast? What does fast mean in this case?” And in a manner that made it almost impossible to detect his intentions, Pete explained that he intended to ride approximately 135 miles a day (or more) to set try to set a new record for the Fastest Known Time (FKT) ever ridden on the Baja Divide.

Before we get into the details of Pete’s ride, let me tell you a bit more about what it takes to set a record on the Baja Divide. Any person who plans to break a record on the Baja Divide must begin in Tecate, Mexico; ride without assistance; and end the ride 1,570 miles later in San Jose del Cabo, tracking time on a SPOT GPS device for the entirety of the ride. The recommended riding time for an average human is approximately 42 days. When Pete began his ride the FKT was 11 days, 13 hours, and 2 minutes—a record set by Lael Wilcox, a shero in the ultra-cycling community who also helped to establish the route. Mountainous terrain and sandy conditions, among other challenges, make this ride extremely strenuous. If weather or mechanical issues arose in such an environment, Pete’s chance at the record would be compromised.

Since our summer instructing together in Alaska almost four years ago, I have gathered that Pete is impressive on his bicycle. However, I grew to understand just how talented he is when I watched him accomplish the FKT on the Baja Divide this December. Riding it in 11 days, 11 hours, and 2 minutes, he beat Lael’s record riding each day with fewer than five hours of sleep. Most impressive is that prior to his ride, Pete had never seen the Baja Divide and felt unprepared, physically speaking. Nonetheless, he was able to navigate without issue, and he faced no mechanical or weather issues throughout his ride.

When he completed his ride, we caught up again. He summed it all up saying:

“That was super crazy. I feel like I have enough stories to write a book. All right, headed to bed—I can barely think. Good night.”

Earlier this week, I got to talk to Pete again about his experience.

How long did you take to prepare for this ride?

When did you decide that you wanted to challenge the FKT on the Baja Divide?

I knew from researching that I had to ride about  135 miles a day to break the record. Going into the trip, I told few people what I planned to do, and I asked the person who coordinates the GPS tracking and Baja Divide record-keeping program that I didn’t want them to put it on social media. For the first four days, I didn’t know where I was in terms of breaking the record, and I didn’t really feel in shape. I sped up as I went along and felt better physically. My backup plan was to take a bus to the finish line if I couldn’t make it in 11 days. I knew I had to get back to Colorado because of school.

How long did you ride every day?

18 hours, and 7 of those hours every day were spent riding in the dark.

What was the biggest challenge?

The stray dogs along the route. They would bark at me and run after my bike. It was kind of scary.

Tell me a bit about the adventure? What was your favorite part?

The people in Mexico were really cool. They often offered me water and a place to stay. The mountainous terrain with old, historic Spanish Missions along the way were beautiful.

Could you ride it faster?

Yes, I could shave two days off of it. But if someone breaks my record, I won’t go back to ride it again to challenge the record. I wouldn’t care.

All of us at Adventure Treks are incredibly proud of Pete!