How to Take Fantastic Photos on Your Adventures 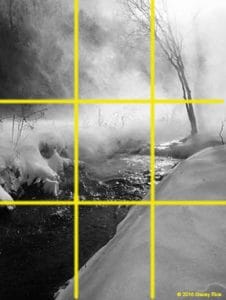 You don’t have to be a professional photographer to capture a fantastic shot. What’s more, you don’t even have to have a fancy or expensive camera. Today’s point and shoot cameras come equipped with systems that rival more expensive options (think digital SLRs), so you’ve got what you need to create a beautiful photograph. The next time you head out on an adventure, just keep these tips in mind and you’ll be creating magazine-worthy images before you know it.

The rule of thirds

It all begins with composition—how you set up the shot can mean the difference between a blah picture and a great photograph. Think of your camera’s screen like a grid, split up into 3 sections vertically and 3 sections horizontally (pictured; some cameras even have a menu setting that displays a grid on the screen). Avoid putting the subject, or the horizon line if shooting the ocean or clouds, in the very middle of that grid. Instead, shift it a little to the left or right, or to the top or bottom, or a combination of those. In the example pictured, the shot was composed with the tree in the upper right portion of the photo and the waterfall splitting the difference. 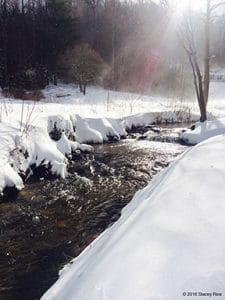 Another important concept to remember is the angle at which you’re taking the photograph. Photographing a scene straight-on can sometimes have a flattening effect, meaning it takes away the depth of field, making the subject look 2-D instead of 3-D. For instance, in the example pictured, the photo was taken from the banks of the creek, with the photographer kneeling on the ground. This way, the water travels from the top right corner to the lower left corner of the image and you can see the change in elevation between the water and the snowdrift. The image has more realistic depth (it also avoided a hypothermia-inducing walk in the frigid water—safety first!). 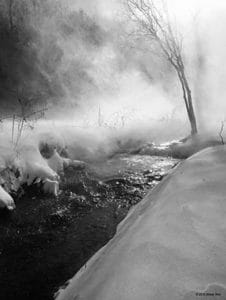 Always think about what will make the photograph look interesting and different. Below, in the image to the left, there’s a pretty contrast between the snow and the creek. But it’s just an average picture… until the wind picked up. Try to include an element of awe or surprise, and you’ll instantly add a wow factor to your photograph. Filters also help add creative elements to an image. This scene was originally shot in color, but was switched to black and white to add a more powerful contrast. Most cameras and smartphones have a variety of built-in filters. Don’t be afraid to experiment. Take the picture in the normal setting as well in case you’re not sure you’ll like the final effect.

One of the benefits of digital photography is you can take as many photographs as your memory cards will hold. It’s tempting to start deleting images out in the field, but resist the urge. Details can’t always be seen on the tiny LCD screen. You’ll be surprised at what you’ve managed to catch once the files are uploaded to the computer and you can see the image in a larger format. Spend the money on lots of gigabytes of storage. It’s worth it.